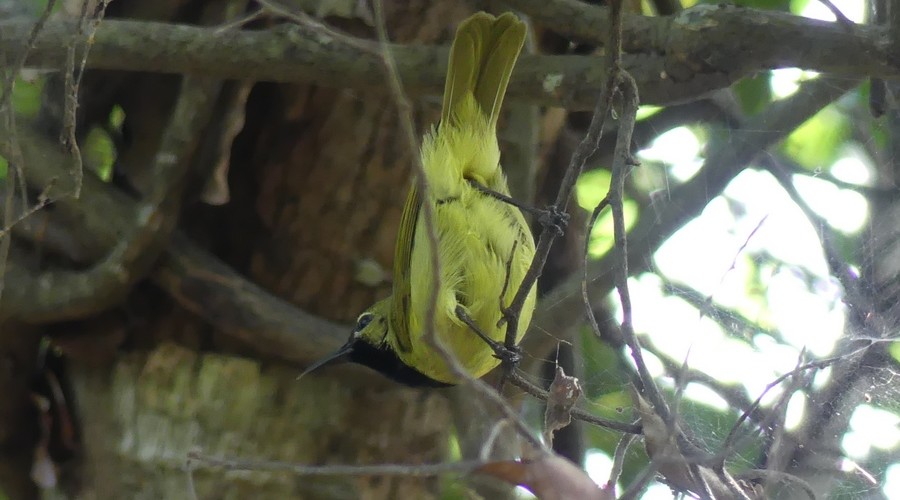 This post is dedicated to the really keen birders because here are the 2 special species that they all want to find when coming to visit Dunes de Dovela. They are not particularly colorful birds but they need a virgin coastal evergreen forest habitat to survive.

The presence of the Black-headed Apalis (Apalis melanocephala, 13cm) in the Dovela’s coastal forest was discovered in 2014 by Thomas. Dovela is now the far south point of its distribution range. In Mozambique, its population is now confined to a few isolated areas of mostly undisturbed forest. They are usually seen in pairs or small parties. They are permanent residents, forage mostly on canopy and very often join mixed-species foraging flocks. They eat insects and are monogamous.

The Plain-backed Sunbird (Anthreptes reichenowi, 10cm) is considered as Threatened in south Mozambique (less than 500 birds) and Near-threatened globally. It is a very small short-billed sunbird. The blue throat of the male appears blackish unless seen in good light. The female has dull olive green color. They are mainly found in pairs and monogamous. They join bird parties. They glean insects from leaves, often jumping off perch and hawking within vegetation. They love mistletoe flowers and eat mostly invertebrates.