From dream to reality:

While working in South Africa as an engineer for oil and gas companies, Thomas explored Southern Africa and even became a certified guide. After his first visit to Mozambique, Thomas called his childhood friend, Fred, with whom he shared a lifelong dream to create a project one day. He thought he found just the place to make it a reality.

Fred and Thomas scoured the coast of Inhambane province looking for the perfect location to begin their endeavor. There was no road to The Dunes, so their first visit, they drove with their guides as far as the sandy road would take them and then trekked east toward the ocean. What they discovered was virgin coastal woodland, still ripe with native plants and trees, home to vervet monkeys, mongoose bush babies and more than a hundred different species of bird. With no nearby water source, the land was uninhabited by people. At sunset they arrived to the peak of The Dunes and captured their first view of the Indian Ocean.

With a rose and sherbet sunset sky set against the aquamarine Indian Ocean waves crashing against the reefs below, Fred and Thomas arrived at the peak of The Dunes and were immediately captivated. Even though they continued their search, they always returned to The Dunes. Despite the lack of basic resources like water and energy, The Dunes was it.

Thomas closed his chapter as an engineer and Fred, a farmer and an architect, packed up with his wife, Sophie Anne, and their three children and headed to Mozambique. They embarked on a four-year journey to create their vision of The Dunes: a sustainable and luxurious nature oasis that would conserve rather than detract from its glorious surroundings. 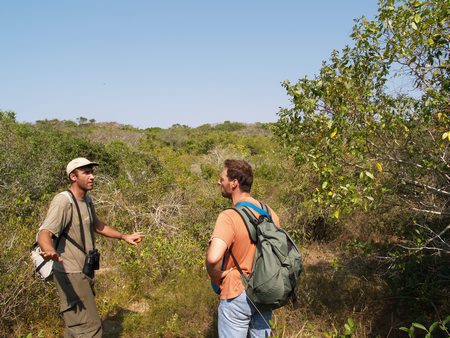 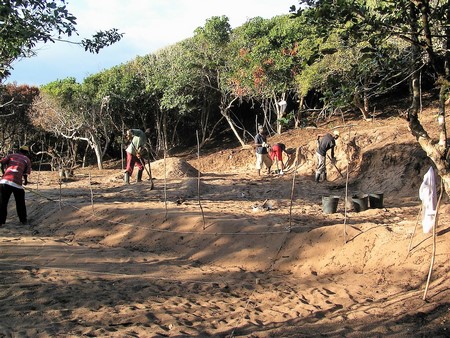 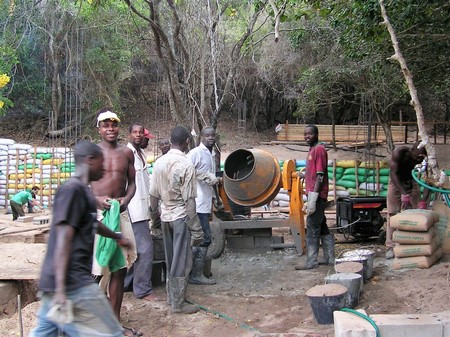 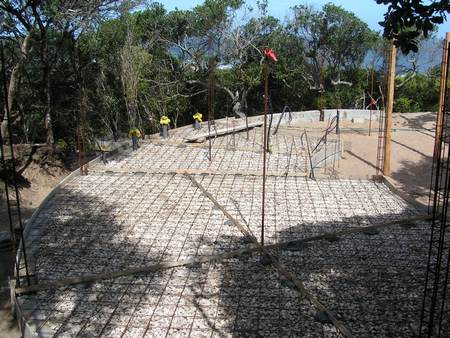 From February 2007 to the end of 2011, the road was long and arduous but their perseverance is in every last detail of The Dunes. They spent years training their team who all came from the local communities to be carpenters, electricians and plumbers and labored side-by-side to lay every brick, cast every wall, hammer every nail and smooth every plank that makes the Dunes. Assembly lines spent months passing cement bucket by bucket from the base camp up to lay the foundation. So many buckets were carried that members of the crew were called ‘Bucket’ back in the village. Over 1,500 tons of materials were hauled in, as much as possible sourced locally, and transformed into The Dunes. Every beam, bed frame, table and chair was crafted right here. 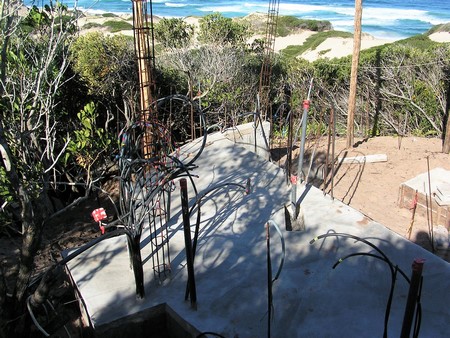 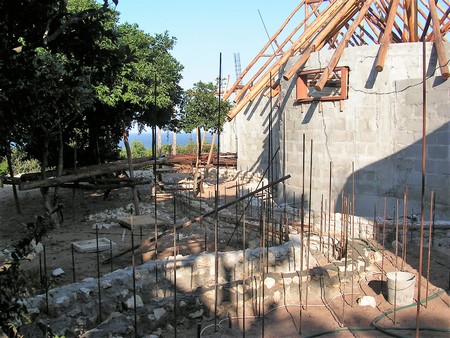 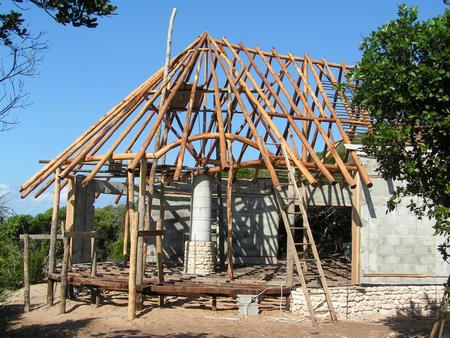 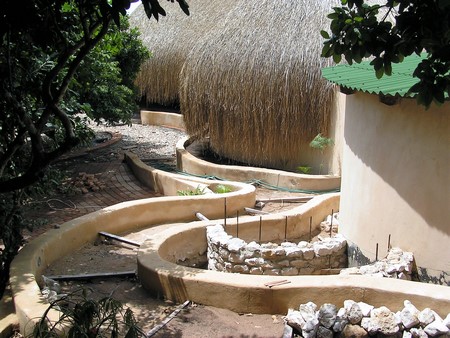 Two years into the project, a friend of Thomas’ working in Maputo came to visit and help with construction, bringing in tow her friend, Alexandra, from Paris. Alex and Thomas were taken with each other and the rest, as they say, is history. Nine months and a few trips back and forth later, Alex quit her job as a project lead in international racial and gender justice work, rented out her Paris flat and dove headfirst into work at The Dunes.

Alex, too, learned carpentry and masonry skills she never imagined would be part of her daily life. In her first months, Alex and Lazaro toiled daily to construct Bungalow Two and she started in on English lessons to prepare for the day the ‘doors’ of The Dunes would open. Once the team that would stay on after construction was selected, it was Alex that led the effort to train everyone in hospitality management and is at the helm of the kitchen. Each meal at The Dunes has been conceived and crafted by Alex and our chefs. 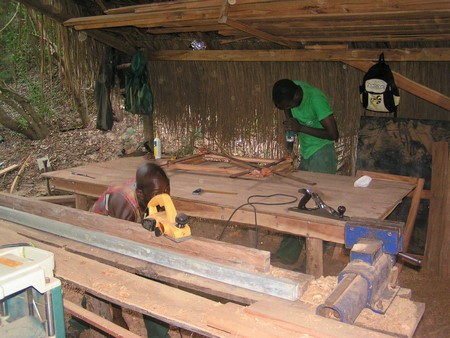 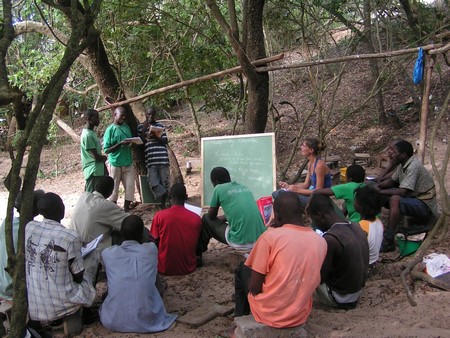 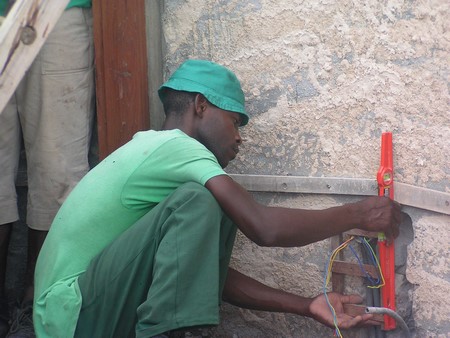 Constantino at the level! 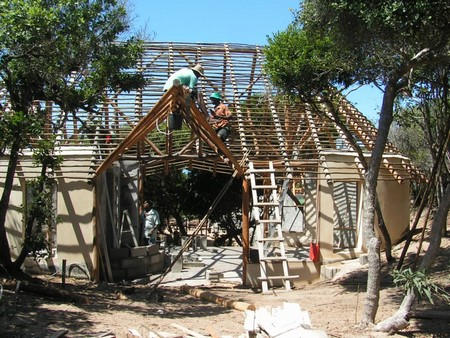 There is no part of your experience at The Dunes that hasn’t been carefully imagined and executed by Fred, Sophie-Anne, Thomas, Alexandra and the team. We all take tremendous pride in sharing our continuous labor of love with each visitor to The Dunes. We hope you feel that during your stay and look forward to meeting you!

And today...
The community..

.. is a big part of Dunes de Dovela’s history. Without their open mind, their intellectual honesty and their strong pugnacity, nothing could have happened.

Up to 70 during the construction, we are now employing 16 people working every day the best they can to craft a memorable stay for you.  For many reasons, local is our main stream, that’s why the main supplies are from around: from building and maintenance material to vegetables, fruits or seafood for the restaurant, our efforts have been put into creating sustainable chains that can reach our objectives: to be fair with the people that host us, to be friendly with the nature that surrounds us and to be able to offer you the flavors that you may not have in your home country with all the required standards.

So at the end, it is not only 16 people that have a decent life close to their family .. but far more.

Time is the key issue to create simple relations that avoid "expectant" behaviors. Therefore, it is only in 2016 that we started direct support to the village. Our efforts turned to primary education.

In fact, the story of the Dunes has started with Dovela’s school. We bought and transported all the material to build two concrete classrooms in the heart of the village. These two conventional classrooms were the price the community asked for the use of the land. Since then, we maintain the 2 classrooms (regular painting, windows or doors repairing etc…) in collaboration with the school council.

Above all, the literacy level is extremely low. The teachers and students all face precarious and difficult living and learning conditions. A number of factors contribute towards high absenteeism levels including; the elevated number of kids per class, the teachers' lack of motivation, the generally low capacity of teacher training, the lack of general stimulation and low encouragement for learning within the family dynamics, the lack of public and/or private initiatives etc. All of such are need to be addressed to improve basic skills, knowledge and literacy. 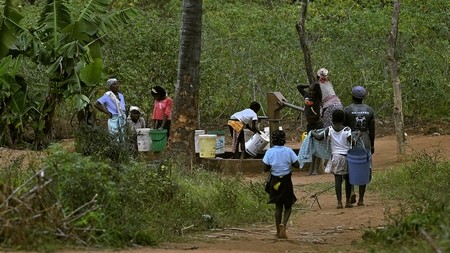 In 2016, we funded and followed the process of a borehole dug at the foot of the school. Accessible to kids, to teachers and to the inhabitants of the village, this borehole supplies potable water to the village and avoids long walks to the lake.

Answering to the permanent statements of the school direction, we funded (and followed the construction of) the Director's office. They can now tidy their files and organise themselves a bit better. They also have a defined place for their meetings. 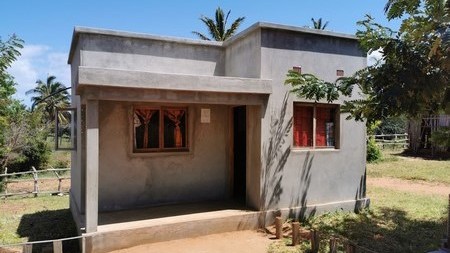 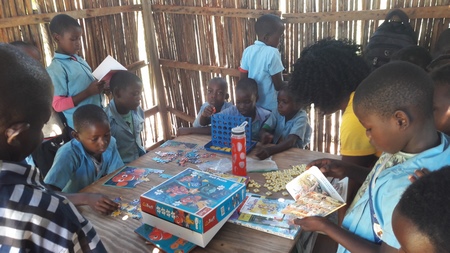 Since April 2018, we employ a young and dynamic lady of the village whose aim is to give life to the stories and tales that different doners offered to the school.  Since then, other games such as puzzles and drawing materiel bring a new dynamic to this new born "library".

Eventually, in February 2019, the school starts building its second block of two concrete classrooms. The working conditions improvement as wanted by the school counsel and the pedagogical team need  to pass through concrete buildings. Thanks to other donations, we managed to fund those classrooms. 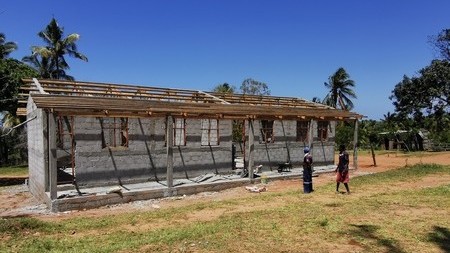 On top of our direct contributions, those actions have been possible thanks to the priceless help of our guests and one company in Maputo. To know more, read "what to pack?"